At 2:38 in the 8th round of this fight, Kovalev was hurt during a clinch with Ward. Low blow? Hard to see unless ringside.

By 2:15 in the 8th, Kovalev is not moving forward and is throwing weak punches.

At 2:03 Ward is rocking Kovalev with right hands. Kovalev leans on Ward who uses that inside angle to get to Kovalev’s body and jaw.

At 1:50, Kovalev reacts to what seems to be a low blow. The fight continues without the Ref recognizing the fault.

1:15 Ward throws a hard left to stun Kovalev, from the outside throws some fast and several hard combinations, follows with uppercuts inside to Kovalev who is rocked.

1:03 Kovalev is hurt badly and is staggering, trying to keep on his feet he wrestles with Ward trying to hold on. Ward is tossing him off and does hit Kovalev with a hook that was a bit low.

From 1:07 until the fight was stopped, Kovalev threw three useless haphazard weak punches. Ward threw at least 25 punches that connected with Kovalev.

With :36 seconds left, Ward is working Kovalev’s body. If there was a low blow it may have occurred at this point.

The Ref did not see all the elbows, rabbit punches, low blows, holding, and wrestling. But he saw that Kovalev was unable to defend himself and stopped the fight with :31 seconds remaining.

I judge fights based on the excitement or level of skill of in a bout. June 17th, there’s a light heavyweight fight between light heavyweight champion Andre Ward and Sergey “Krusher” Kovalev, the Russian challenger for the second time.

Hum ho. Here’s how much people care: NO sports bar in ALL of Metro Orlando is showing the fight. I will NOT buy the HBO Pay-Per-View fight.

Fans could stay home to watch, but I know fight fans prefer a crowd to talk about the fight and experience the second-hand fight excitement in a bar with several hundred other fight fans in a bright, exciting public venue. Fans today will have to find someone paying for this rout and smash into their living room.

I Prefer to Watch With Fans 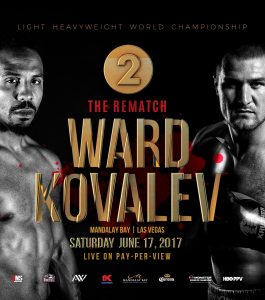 talk with fight fans because they have insights into the sport and always have a story as to why their favorite fighters matter.

Today, they would say Andre Ward will decision Kovalev again. Although some will pick Kovalev just to break the monotony of this fight.

When fans come to a sports bar to watch a fight they pay per person to see the bout at about $10 each to get into a bar for a fight. Today no one’s showing the fight so I’m not watching. I just don’t care.

I didn’t like the first fight. I don’t care about light heavys. I’m only interested in lightweights, welterweights, middles, super middles and heavyweights.

Everyone has favorites, right? But tonight, here’s what’s going to happen: Ward will win by decision, again.

Kovalev flash knocked down Ward in the second, but couldn’t stop him or hurt him after.

To me it was a done deal, a loss to Kovalev. I don’t want to see a second go-round.

Why Do I Care?

My job is to look at everything and analyze fights. I’ve got 30 years of covering boxing and watching and seeing what fighters look like before, during and after a fight to know what’s going to happen.

Kovalev vs. Ward 2? There’s no surprise. Boxing is physical, brutal and most fighters don’t get bursts of adrenaline to come back like Rocky in the last round for a KO. That’s the movies folks. This match could use that excitement but won’t get it.

Movies, people, do not reflect on the brutality of the boxing ring. They can’t show you what really happens in the ring. It can’t be duplicated. The movies show you what you wish would happen.

Today, Andre Ward will step back into the ring against Sergey “Krusher” Kovalev and win by decision. I won’t watch. I don’t need to. I saw the first boring fight.

I’d watch the middleweight bout just to see some middleweights with decent records. And he’s from Wisconsin, so I’ll be watching that Badger.

Regarding Ward-Kovalev, the outcome will be the same as the last fight, which was not exciting nor a great combination of styles. I could barely watch it to the end. Ward by decision.

Neither fighter was powerful then, both were weak from making weight and looked lackluster all 12 rounds.

Lots of fan boys (writers who write whatever a promoter prints and idolizes fighters) like to hype the fight and let the fighters talk about each other. Talk crap to get some excitement.

Currently, it’s Ward saying Kovalev has made racist statements and that the political scape today (U.S. vs. Russia) is an angle for this fight. While fighters and matchmakers like to say styles make fights, really, numbers make fights and statistics.

This shouldn’t be a surprise to anyone if you watched the last fint. But here’s the nuances that only a trained eye can see.

I Was Only Wrong Once 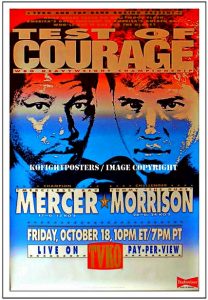 I know when fighters walk into a ring who will win. And I’ve only been wrong one time when I made an emotional choice. I was sick of hearing about Tommy Morrison, so I picked Ray Mercer to stop him.

The Morrison vs. Mercer fight was in 1991. I thought that Morrison could stop him but I was dead wrong.

That night on the news desk, the oldtimers were excited because a relative, a bloodline from John Wayne was entering the ring. I wanted to maybe give them some hope, but I knew it was far fetched.

Rocky was in its fifth installment and I’d just seen Morrison in the movie. I didn’t think he would beat Mercer based on his skills, but based on his popularity which does count in the ring.

Mercer stopped Morrison in the fifth and that was the last time I made an emotional decision in the fight previews. I cut to the chase and don’t pull any emotional punches.

Please, No Ward vs. Kovalev 3

I worried about Krusher winning by KO, or TKO, or even a split decision, after I heard promoters/boxing writers say they’re already looking at a third fight.

From my perspective Kovalev is an off-balance wannabe power puncher, slow at the age of 34. He throws wildly and without the power to stop Ward. He could, but needs to figure out how to throw from behind his legs and carry that punch all the way throw to his fist. He doesn’t have that figured out so he throws from his waist and can’t stop anyone.

Kovalev will have to knock Ward out to win this fight, and sure that’s possible, if Kovalev “Hulks Out.” Kovalev is long and lanky, off balance and throwing wildly, always with a reach that is 1.5 inches shorter than Ward’s. Maybe a shot will hit Ward in just the right place.

Ward is as conditioned as ever and he knows what he’s going up against. He knows all that Kovalev will bring. He’ll use that extra 1.5” inside and with some uppercuts when Kovalev comes in to jab and stick Ward from the outside.

Ward’s got a tight, and seemingly shorter reach but he’s faster, more efficient and Krusher can’t get inside to knock him out that I can see: Ward owns that area of the ring. It’s where he sneaks in with his short jabs, hooks and left hands.

Ward is Not Powerful

I don’t like that Ward is a pittypat hitter, not a strong knockout artist. I don’t see him stopping Krusher. Ever. That would shock me.

Ward’s in the power corner and there’s nothing a guy the age of Krusher can do to speed up or power up over a younger, faster fighter. It is only one year, and those spare reach inches, but all of that matters.

I don’t care who’s in Krusher’s corner. He wasn’t an exciting fighter the first time. His off balance punches and style won’t allow him to bring the power from his legs through to his core to knock out Ward.

A Note on Boxing Trainers

There was a little argument that John David Jackson, Kovalev’s trainer, was approached by Ward’s Camp. Some nonsense so that people would look at this fight again.

FYI: from 1987 to 2004 I watched Emanuel Steward train fighters. I watched and talked to the trainers who FIRST trained Thomas Hearns. From sitting ringside in the 100+ degree Kronk gym during daily workouts for many years, I saw and heard a lot of insider tactics.

I talked with and interviewed Kronk trainers on and off the record. I saw sparring partner selection. I saw private sparring sessions. I watched impromptu battles in Kronk that were never ever on video or YouTube. I saw fighters work out from Day 1 to the day Training Camp ended.

Watching and observing does NOT qualify me as a trainer. Nor does time in the gym with a world champion. Anyone can catch a fighter’s mitts and tell a world champion fighter which punches to throw. That does not make a trainer great.

Only a great fighter knows how to change style, switch up strategy in the middle of a fight, counter an opponent’s style and get a fighter to pay attention when the adrenaline, pain and cacophony of head shots and pain kick in. It’s unimaginable the brutality that a fight is exposed to. Unreal and it cannot be relayed in any means.

Nutrition, weight, tricks, skills from taping, to running off extra weight, sure they’re important but they do NOT affect a world champion’s skills. A fighter’s talent is set by what he falls into when he’s under attack in the middle of the ring. The adrenaline kicks in and a fighter either knows how to win, or he loses.

In short, fight fans will get hyped up, talk sh*t with fight fan friends and then by 11:30 you’ll be disappointed and hoping for another fight to be announced on HBO, or Showtime or ESPN.

At best this is a repeat of the first fight. At worst, one of them gets knocked down twice.

But damn, you fight fans want a knockout so you’re watching again. Ignoring the fact that no time in boxing history have you watched light heavyweights… Until HBO and Roc Nation stuck them in the ring and started promoting them.

Better off watching the undercard. Look for an exciting fighter on his way up. And stop buying pay-per-view. Head to the sports venues and talk with other boxing fans. If you stop paying, they’ll have to provide better fights.