There’s nothing worse for a fight fan than watching a poorly scored fight that causes a fighter to lose a title surrounded in controversy. It’s why we hate boxing knowing that fighters, the warriors who work years to get title fights, are getting screwed over.

Why We Hate Boxing

A disputed score card as in the Manny Pacquiao vs. Jeff Horn fight makes boxing look one step away from the WWE. But the fighters are the ones who are NOT in on the secret. They’ve trained and sparred, made weight, did the road work, battled with promoters to be placed on a card. Fighters are the ones that suffer a controversy after a clearly fought and won boxing match.

And for the record, WWE is a lot of fun and its fans do know the wrestling is staged. Wrestling is about entertainment, storylines with legitimate athletes and over-the-top characters who people love and hate. The rivalries, the celebrity and showmanship of professional wrestling is clear: This is a show put on and orchestrated from start to finish.

But in boxing, the lines are now blurred beyond distinction.

Now, boxing is almost forcing fighters to save the sport by going for a knockout. A fighter today knows that only KOs prevent nonsense and shenanigans in a fight ring.

Fighters now have worry about what happens if a fight goes to a decision? Then, the judges hold fighters’ fates and lives in the score cards which means fighters have to work towards a knockout in every bout. Talk about pressure on the job.

Fighters Have to KO Opponents

While fight fans love KOs, fans appreciate incredible skills and an evenly matched bout between two skilled fighters with styles that complement each other.

The challenge lies in the number of fighters who can actually knock an opponent out over and again–without the benefit of an opponent with a glass jaw. And no fight fan or fighter wants to fight a stiff. Below are KO percentages of world champions:

Case in point: Gennady Golovkin has one of the best KO rates in boxing–89%–making him a huge fan favorite. To avoid chicanery, Golovkin will have to completely knockout–KO, not TKO, not decision–Canelo Alvarez who has a 67% KO percentage. The fight is well matched and fans await the September 16 date in hopes there will be a KO–and no nonsense.

My Prediction: There will be chaos and something will happen during and after this bout. It’s too big a fight not to have a ridiculous outcome to further anger fight fans who will take to the Internet talking and blogging and vlogging about it…which will spur a rematch of course. Nope. I’m not paying for it.

Boxing fans are frustrated. They’re jaded and disappointed. Fans just want to see an honest fight. For the past 13 months I’ve talked with boxing fans and I asked everyone the same three questions:

Q. Who are you here to see tonight?

Q. Who’s your favorite fighter of all time?

Q. What do you think about boxing today?

Q: A new question I’ve begun asking: Where do you get your boxing information?

It was and is very interesting to hear firsthand from the fight fans. I record all answers and they gave first names or initials. I never know what people will say like this quote from 23-year-old Maria from Peru who said her favorite fighter was Rocky Balboa.

“Boxing’s not real anyway,” she said. “Rocky Balboa because he’s like based on a real guy, right? But I knew he could never really beat those guys he fought he was too small.”

The Writing Was on the Map

Fans are tired of seeing fights like Pacquiao vs. Horn: dirty ring tactics, ridiculous outcomes. As soon as I saw it scheduled, I knew something outlandish would happen to further ruin the sport’s image. I was hoping I would be wrong, but the writing was on the map:

HBO, Showtime and ESPN hosts are not impartial journalists while working the shows. Yes, they have backgrounds in journalism. But when they are ON these shows, they are paid as show commentators and color analysts allowed to give opinions that shape what the audience thinks. They are provided scripts, talk points, fighter bios, back story so that the entire broadcast production is scripted.

The fights are planned. Sure, Teddy Atlas’ comments were not scripted. But he was not allowed to question Bob Arum, the boxing judges or both fighters and their teams to investigate what happened. That is journalism.

Journalism is without opinion. Journalism shows both sides: good and bad and looks into who, what, where, when and why. Journalism provides balance in a story and asks the hard and uncomfortable questions.

Commentators are hired to provide excitement, background, statistics and information to hype and keep viewers engaged. The information provided is over the top positive and showy, nothing controversial going on outside the ring. All controversy remains inside the ring. 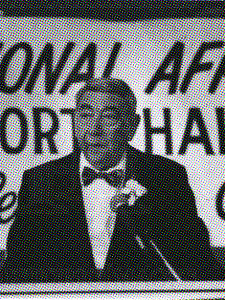 The difference between Howard Cosell, an ABC sportscaster, and the commentators on HBO, Showtime or ESPN?

Howard Cosell called out bad fights and dirty deeds: on air. Live. When they happened he got to the bottom of it in pre- and post-fight interviews.

He regularly battled and argued with fighters and promoters  Subjects braced for interviews with Cosell because he always asked the tough questions and put people on the spot with nowhere to go but to an answer.

Cosell insisted on telling fight fans when he saw something go wrong. Cosell quit on-air on ABC in 1982 and said he would no longer cover boxing. Yes, he was dramatic, yes, he was over the top, he was a personality. But fans knew him as a journalist who asked and got answers to what people wanted to know.

I met Cosell and to sit next to him on the dias at the Afro-American Sports Hall of Fame awards dinner in Detroit in 1989. He was frustrated because Muhammad Ali was supposed to have joined him at the event but was unable to attend. It would have been their first reunion in years.

Cosell was in a very bad mood and felt that without Ali, that he was brought to the event under false pretenses. I talked to him and started to ask him about the highlights of his career and then asked him about the day he quit, why he quit, and did he regret it?

“(Larry) Holmes was killing (Randall “Tex”) Cobb and nobody cared but me,” Cosell said. “That was wrong and I couldn’t do it anymore. Not in good conscience.”

He said career highlights while covering Muhammad Ali. Cosell also said he did not regret anything he’d done in his career. Then, he looked me dead in the eyes and said, “boxing is a dirty sport and I could no longer be a part of it.”

Cosell said this with a flourish that included him slamming his drink down loudly on the table. He was disappointed Ali never arrived. But Cosell welcomed the athletes into the Hall and signed autographs.

ESPN, HBO and Showtime may be arbiters of sports, they put on great shows, flawless fights, but not sports journalism which would require fair and balanced, objective stories and the very difficult questions.

That’s the side of journalism that many are afraid to ask or say these days. The other side, the bad and unpopular and difficult interviews grilling promoters, grilling fighters, managers and trainers is NOT happening in boxing today. That has to change if boxing is going to remain a fan favorite.

Boxing fans are very aware of what’s happening and they’re not happy. I wish I had quotes from fans who said that they think boxing today is great. I didn’t find one. I’m still looking.