Rebekah Brown
Sign up with your email address to be the first to know about new products, VIP offers, blog features & more.

Boxing is ingrained in world sports history. I’ve been watching and writing, asking and analyzing since 1987. Here’s why we love boxing.

Beltran is  the last active fighters from when I covered boxing as a reporter and columnist.

Madison Square Garden, host to some of the nation’s greatest U.S. bouts, on Saturday night hosts co-main events. An interesting card will feed the needs of a likely sold out fight crowd hungry for who’s new and who’s next. 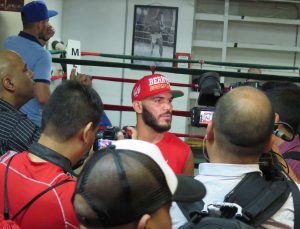 ghtweight titles and will fight Peruvian Jonathan Maicelo in a 12-round IBF elimination title bout that includes the rights to the vacant WBA International Title.

Beltran, from Phoenix, is a Top Rank fighter but was an amateur, about to sign with Emanuel Steward when I met him in Detroit.

Champions fight because they believe they’re the best. Warriors never quit. Boxers are the gladiators of our times. This is why we love boxing.

The reasons why we love boxing are more primal and innate to our physiology than most people realize.

There’s a chemical need and craving that seeks the regular release of dopamine often experienced while watching violence in its many forms.

In the days of the gladiators, just before the year 300 B.C. the Romans and Greeks knew that by staging events and games where slaves were sacrificed to fight, pitting man against beast, or man against man, that crowds could be controlled through distraction.

Romans and Greeks provided entertainment to more aptly rule crowds who would have in sheer number overthrown those who oppressed them with taxation, legislation and forced work.

The thought process behind the shows was that the crowds would focus on the sport and experience the thrill felt in watching a victor, and for a while, would forget the challenges of everyday life.

Thus, began the inception of the original Olympic games by 700 B.C. Nothing quite as noble as the story where man aspired to be as powerful as a Greek god performing incredible athletic feats.

Two sides to every story when you read history books not found on the Internet.

On another continent, from the year 500 B.C. to 1700, England held bareknuckle boxing pitting slaves against each other and settling regional and sometimes legal disputes letting one side fight the other publicly in bare knuckle boxing matches.

Brought to the United States by immigrants from every nation, the history of boxing is a messy and guttural mélange of racial and national pride and combat.

Boxing is and was heritage, strength, power and bragging rights. Its initial debut was a public manner to settle problems among communities.

Boxers became those asked to exert control in times of turmoil politically and economically.

In 1743, Jack Broughton rules (named for the man who instituted seven basic rules of bareknuckle boxing and some followed in boxing today) were used by slave owners on who pitted men against each other for sport.

The Sport of Gentlemen

Dubbed “the sport of gentlemen,” boxing has a brutal and dark history where one “gentleman” bet another “gentleman” that his slave or paid man could defeat the others’. This is not unlike gladiators forced to fight at the pleasure of rulers controlling their lives.

Boxing’s history is still overcome by the human need to watch and win a brawl for territorial, political, and community rights.

As violent as the sport may be, boxing is ingrained in the lives of millions over the past several hundred years. Boxing holds a powerful fascination for watching the survival of one in a ring where champions are crowned.

People turn to boxing to watch their modern day warriors; their heroes and favorites who fight for the bragging rights and honor to be named the best, No. 1.

Boxing is sometimes called the everyman’s sport because people of all walks of life love the sport. It’s also a way to deal with the stress of the week. Maybe the boss was a jackass, or cut wages, hours or benefits. Maybe news about a new job or business venture went sideways. Maybe a love was lost, a savings spent. Boxing can fix that.

Because on a Friday night, or a Saturday, fans can watch a winner; a world champion who has worked for years to be the best. Overcome the odds. Fought through challenges faced and won…over and over again.

When fighters win it’s the emotional connection that happens and lifts spirits and lightens loads carried. Boxing was and is the respite for anyone who faces the week and sometimes loses, or sometimes wins, but always, always keeps trying.

That’s what people recognize and respect in fighters: the will to endure and survive another day, another week doing the very best to succeed.